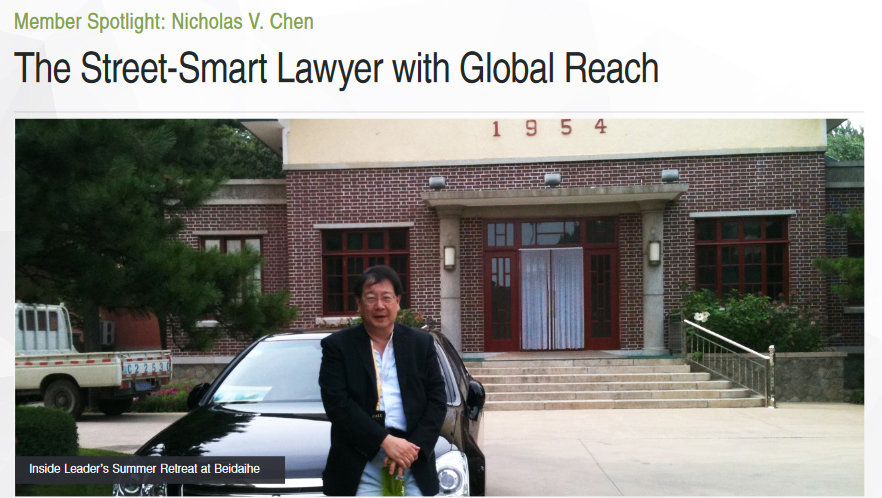 Nicholas V. Chen was  featured in the latest issue of IR Global Member Spotlight. Please click here to download the spotlight as a PDF, or read on below for the full text.

Nick Chen’s ‘China journey’ is already in its fifth decade. During that journey, he has guided many international parties into China and many Chinese parties overseas. Acting as both strategic advisor and street-smart bodyguard, he delivers integrated practical and actionable business legal advice and solutions so clients can successfully bridge across cultural and societal divides. Clients who understand and embrace the realities of the local ‘last mile’ context are better prepared to achieve business success.

“Hearing what the locals know, recognizing what they see, connecting with the current realities and coming trends is invaluable”

His professional approach is to ‘go local’ and rely on ‘boots on the ground.’ Hearing what the locals know, recognising what they see, connecting with the current realities and coming trends is invaluable to being able to examine and accurately grasp a society’s observable facts, and extrapolate and infer the non-observable shadows correctly. Many professionals are dependent on filtered indirect information sources; they can only observe from far away or from their luxury hotel. Traveling on subways, taxis, trains or buses provides an opportunity to feel the grass roots working class, of a society. Going to local markets to listen to housewives and grannies and playing chess with elderly retirees in the parks helps Nick better understand and relate to the pulse of a society’s issues, trends and dynamics. His lifestyle is not only fun but helps deliver success for his clients because the ability to accurately parse through a variety of perspectives in the context of a rapidly changing society improves strategic and tactical decision-making.

Many professionals conduct due diligence. However, in greater China, the landscape is littered with countless failed investments and de-listed companies. Why? Chinese due diligence is not about completing a review of a checklist of documents about the past; it is about verifying information in the context of a changing society which helps one design strategies and tactics to protect one’s business in the future. If one does not understand where a society has been and where it may go, then due diligence of paper documents focused on the past is useless. Hundreds of failed investments with global professional firms applying standard mechanical western document checklist approaches is proof that doing business in China is not for novices. In China, due diligence does not end at the closing, rather, it continues after one has engaged with/invested in a China business, after one’s assets, technology, reputation and people are committed and at risk. Then is the time to apply resources to monitor and protect against the challenges in an eroding business ecosystem.

Nick says: “In western-style due diligence, there is no piece of paper that is going to say the management will do everything they’re supposed to do and that says ‘I/they will not steal your money.’ Can the professional who doesn’t know China really look into the eyes of the Chinese counterparties and see whether the checks and balances are there? Whether the moral compass and the strength of personal character exist? If they are not sure, how can they design counterweights and put them in place to systemically address or prevent potential problems? How can they do that if they do not think local and have the ability to operate in the context of a changing Chinese society? Are they really going to be able to do that from their luxury hotel or the rarefied atmosphere of London or Wall Street, where people think and act differently?”

Nick is a second generation American, born and raised in New York City. His ancestors are scholar-literati: teachers, engineers and teachers of engineering. Some were dynastic exam winners. His father’s and   grandfather’s generation were telecom, railroad, electrical power, bridge, civil, hydraulic engineers, who crossed the Pacific to learn the latest techniques, before eventually returning to China to build an industry and teach their skills in the country’s top universities. Some were musicians, economists and lawyers too.

His grand uncle, the first son of a Qing Dynasty exam winner, went to Michigan Law School in the early 1900s to learn common law, before returning to Shanghai to sit on the city’s governing Municipal Council. He was a bridge between China and the rest of the world during the 1920s to 40s. When Nick was a child visiting his grand uncle, he was riveted by the stories of this pioneer lawyer building the society and a better future. Reading letters exchanged between his grand uncle and world leaders (e.g. the first letter was with Ethiopian Emperor Haile Selassie) intrigued and hooked Nick on the idea that a legal career could help build and protect a better future for Chinese people and their society.

The weight of family history still sits with Nick. It is no surprise that his current role as a conduit for investment into and out from China has in some ways had a greater impact on China’s evolution and modernisation than the hard engineering and technical skills of his ancestors.

“An integrated business and legal skillset has allowed me to follow that impressive trail left by my ancestors. The irony is that, because of my skills, I can cut across all silos. I can cross borders, integrate technology, money and regulations. I can make the engineers talk to the finance guys, and the government regulatory guys speak to the construction guys. Because of that I have been able to successfully deliver more mega wattage of electrical power to China than my engineer ancestors; yet I can barely change a light bulb. My grandfather studied at Purdue (University) in 1925 and was one of the pioneers of radio technology that is the foundation of all today’s, mobile wireless and satellite technology. Yet I could change more lives by enabling mobile systems by convincing the PLA to release the 802.11MHz bandwidth for society’s benefit for free.”

When talking about his work, Nick refers to himself as a business consultant and ‘street smart bodyguard’ lawyer. Therefore, clients value him. This kind of relationship is an important cultural difference that all his clients deeply appreciate when attempting to engage with China.

“The intelligent win before they fight. The ignorant fight to win.”

Nick draws wisdom from the Three Kingdom period strategist Zhu Geliang who said: “The intelligent win before they fight. The ignorant fight to win.” Nick believes this is relevant to every professional and every business that operates in China.

Nick says: “If you (and your advisors) don’t know what you’re doing, you are just fighting and hoping to win, then you may have already lost. In many industries, if you win the China market, then you are going to win the global market. Success in China will drive success at home and globally.” This is at the heart of his ‘go local’ and ‘boots on the ground approach.’

The motto of Pamir Law is – Serve, Inspire and Transform Lives. When considering new clients, they seek those that deliver positive social benefits.

“’Tikkun Olam’ …means ‘heal the world.’ We apply this concept, because we are about making a difference, not just maximising profit.”

Nick says: “Much of the work we do as professionals is for profit, but our colleagues, in both Taiwan and China, support social enterprises to make the world a better place. We believe in the Hebrew expression ‘Tikkun Olam’ which means ‘heal the world’. We apply this concept, because we are about making a difference, not just maximising profit. For example, religious groups that come to us for help, whether they are Roman Catholic, Buddhist, Orthodox Jewish, don’t get billed.”

It is clear to us that Nick Chen has his feet (or boots) firmly on the ground when it comes to his professional work. Even clearer still, is the passion he has for Greater China and the Chinese people. He is a man responding to the weight of history and his own forefathers’ call to make China a better place. They would certainly be proud of his achievements so far.